To facilitate small group collaboration, you can create breakout groups that are separate from the main room and assign attendees to them.

If your session has more than 250 attendees in it, breakout groups is turned off. 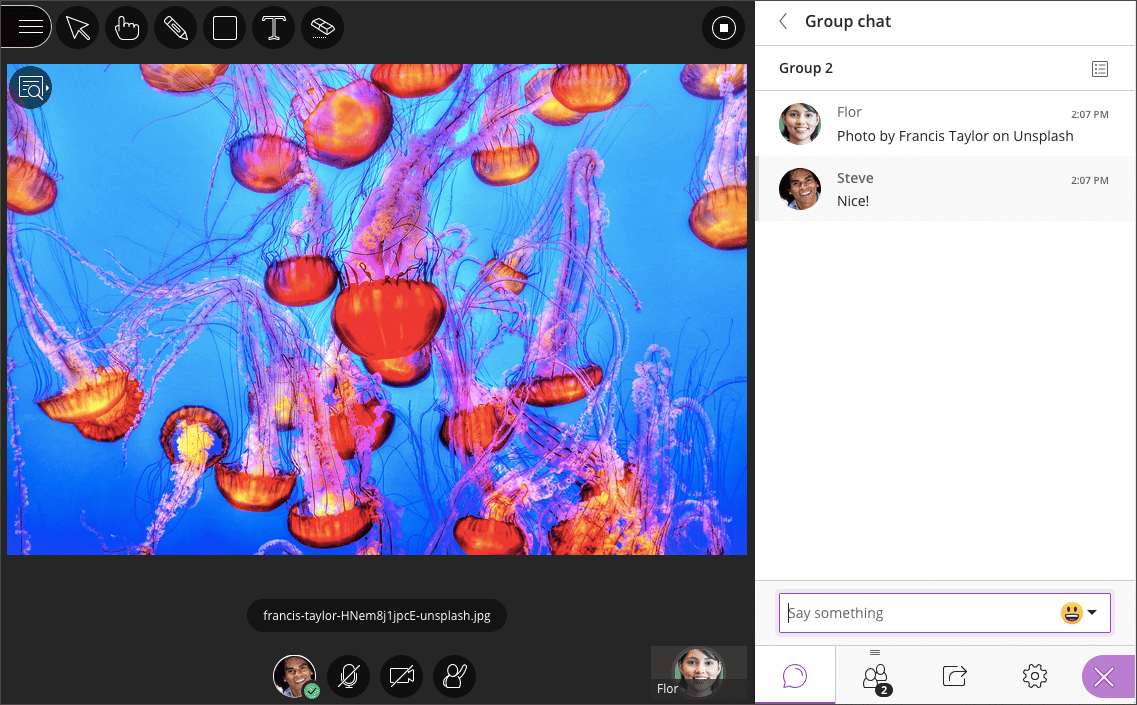 Breakout groups have their own private audio, video, whiteboard, application sharing, and chat. Any collaboration that takes place in a group is independent of the Main room (and other groups).

What is said or viewed in a breakout room isn’t captured in recordings.

Watch a video about breakout groups

You can choose to have Collaborate create and randomly assign breakout groups for you. Or you can create the groups yourself. Breakout groups are assigned during the session. You can’t create them ahead of time or save them.

Start breakout groups with the groups created in your Blackboard Learn course. Use your existing course groups to create breakout groups in advance and save time. Build on existing student collaboration.

With the Collaborate and Blackboard Learn integration, students can stay in their same group without extra work for the instructor. In the Collaborate session, the instructor can also enjoy some flexibility and adjust groups as needed without impacting the groups in Learn. For example, to balance groups among attendees.

The Collaborate and Blackboard Learn groups integration is available on the SaaS deployment. It applies to both experiences:

When you start a breakout group, go to the Assign Groups menu and select Course group set. Choose the set of groups you want to use and start the breakout.

After groups have started, sometimes you want to gather all attendees together in the main room without losing the groups already created. In a while, split them again into their groups.

To do that Pause and Resume buttons will allow you:

For a better experience, only the moderator who paused groups can resume them. 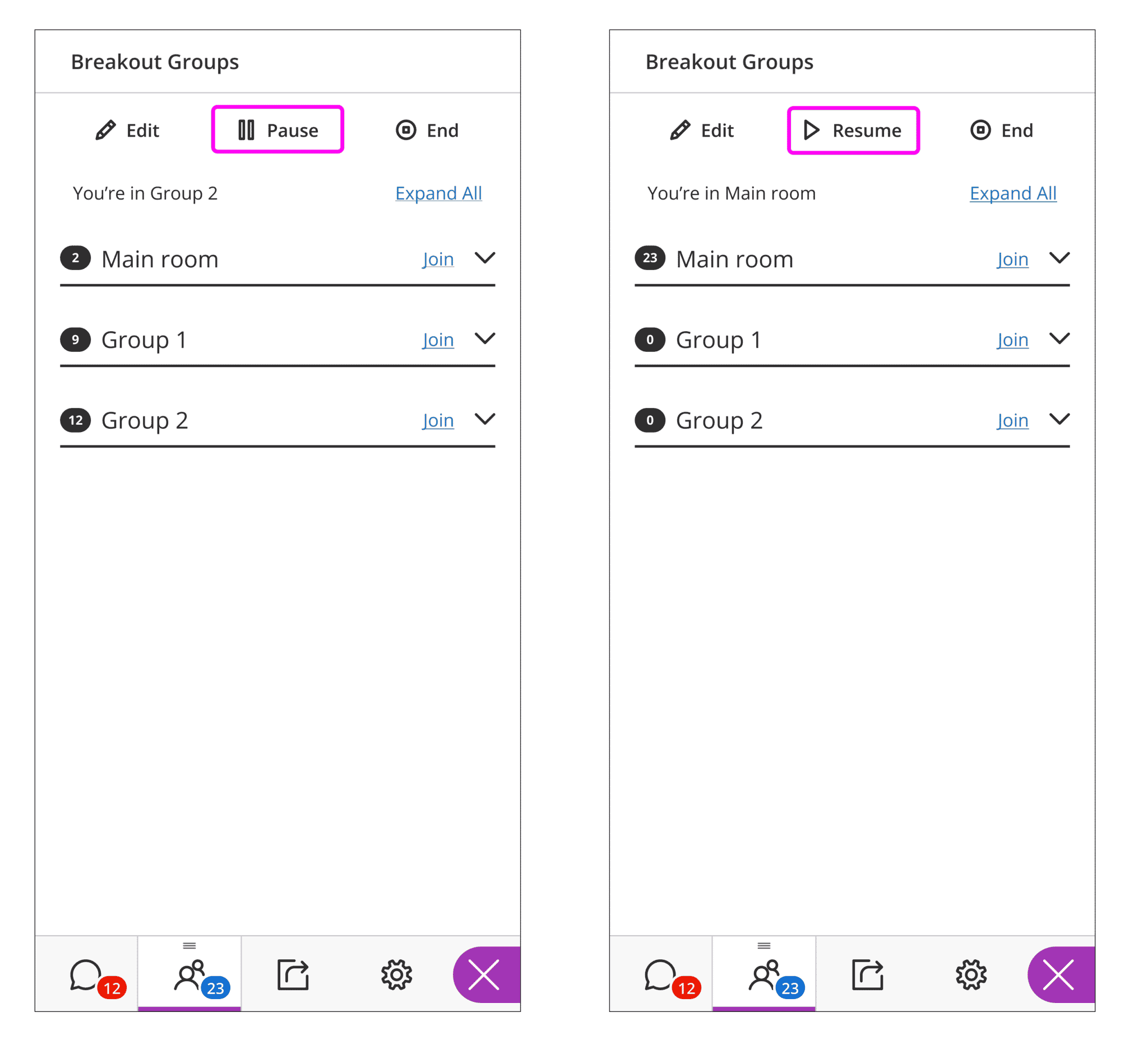 Watch a video about sharing files to breakout groups

You can share files, with one or more breakout groups.

The first slide of the file displays in the breakout group. 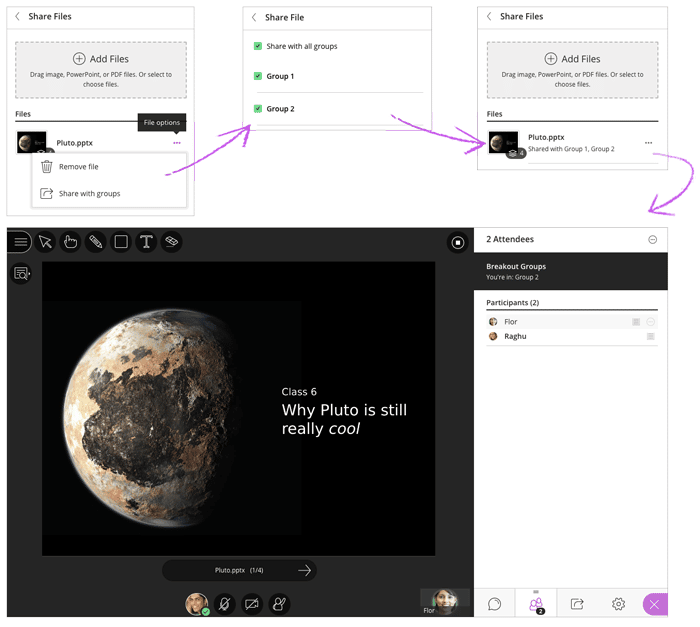 You can also save group files to use later. Find the breakout group files and save them to the main room before logging out of the session.

What can attendees do in breakout groups?

Breakout groups are designed for group collaboration. Every attendee in the group is a presenter. This means that all attendees can share the whiteboard, files, and applications with the rest of their group.

After breakout groups are started you can move between groups to monitor them. If you assigned yourself to a group, you see and hear what others in the group are doing. This includes any shared content, audio, video, and chat.

If you want to see how the other groups are doing, you need to join those groups. From the Attendees panel, select Join group.

Group chats are private to the group. The Everyone chat room is open to everyone, no matter what group you are in. As a moderator you also have a moderator only chat room.

You can’t move between groups if another moderator is updating the breakout groups. 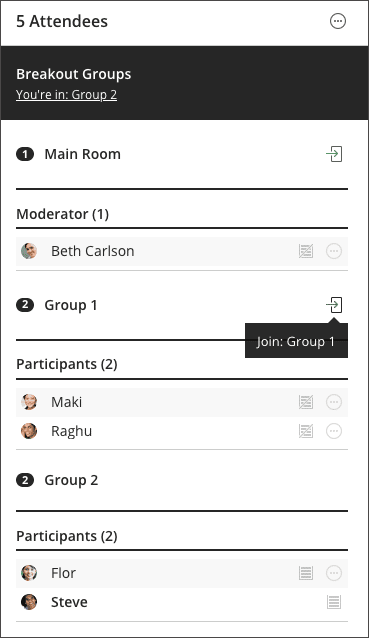 Move attendees to another group

Moderators can move themselves between groups by selecting Join Group in the Attendees panel. You can also move other attendees.

You or your attendees can’t move between groups if a moderator is updating the breakout groups. 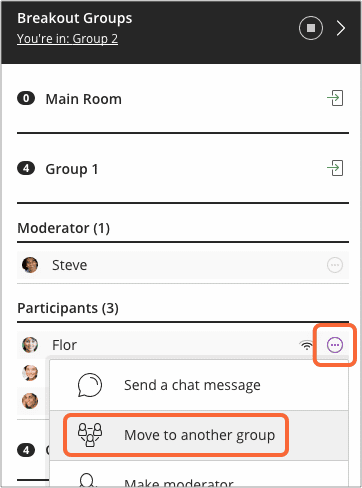 Can I remove someone from a session?

Yes. You can choose to move them back to the main room or to another group. Or you can choose to remove them completely from a session. Open the attendee’s options menu from the Attendees panel. Select Remove from session.

What happens if another moderator makes changes to the groups?

After you select End breakout groups, all attendees are moved back to the main room.

After the groups have ended everything shared in a group is not available in the main room. Give your attendees a few minutes warning that you are ending the breakout groups. Give them time to take a screen capture, or record in some other way, what they were working on before ending the groups. 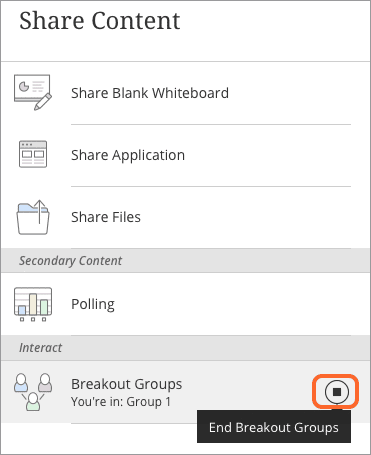 Save files from breakout groups

You can also save group files to use later. Find the breakout group files and save them to the main room before logging out of the session.

The group file is saved to the main room and can be used again.

Annotations and edits made on the files are cleared when the session occurrence closes. 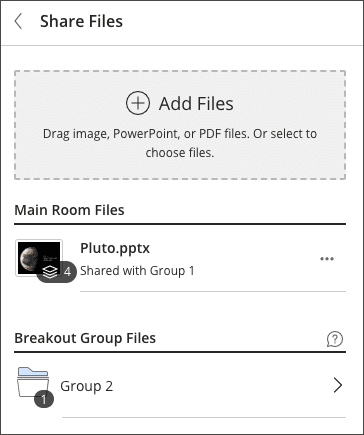 What is said or viewed in a breakout room isn’t captured in recordings. Collaborate stops recording your session if all attendees leave the main room to join breakout groups.

You can start your recording again from the Session Menu when one or more attendees return to the main room.

Delete a single item on the whiteboard. The eraser button clears all annotations from a board/slide. Use the Select tool to select a single piece of annotation and then the backspace key (not the delete key) on your keyboard to delete just that selected piece.

Rotate content on the whiteboard. Use the Select tool to select an object, then select and drag the (very) small box that appears part way along the right hand side of the selection box.

Assign more than one attendee to a group at once. If manually populating breakout groups, you can hold down shift on your keyboard and select many attendees at once. Then drag and drop them into the relevant group. You can also select the “…” of each attendee’s row and pick a group for them that way.